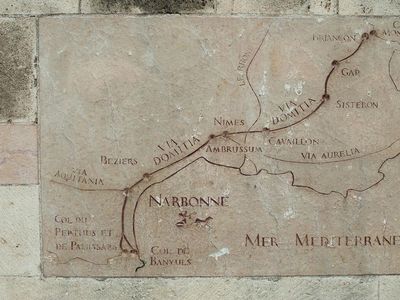 With the construction of the Via Domitia , which was the first Roman road in Gaul from the year 121 BC, the Romans follow in the footsteps of their predecessors, namely the Etruscans, Phoenicians and Greeks, who established the first trade links with the Gauls starting from Oppida, the fortified celtic settlements. At that time there were already several urban centers in the region: Agde, founded by the Greeks in the 7th century BC, the Oppida Ensérune (you pass by on our bike tour Canal du Midi) and Ambrussum, the fortified Gallic city of Nîmes (on our bike tour Languedoc Camargue), the Oppidum Béziers and then Castelnau-le-Lez. The construction of the Via Domitia secures the development of these places and creates new cities, including Narbonne, built in 118 BC, founded by the Proconsul Domitius. The towns are flourishing along this Roman road, but also rural areas. Paving stones laid 2,000 years ago mark the Via Domitia tracks, which were dug by antique wagon wheels. Experience 20 centuries of history on one of our cycling tours in Occitanie and in the Provence!