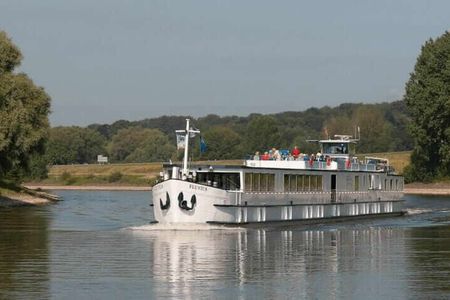 Two countries, Holland and Belgium, united in one route. Combining the highlights of Holland’s Golden Age and the heyday of the Flemish trade cities in the Middle Ages. And of course Holland’s own world wonder: the Delta Works. Variety is the keyword of this tour. Cycling and sailing you will cross different landscapes, such as the green Dutch polder landscape with water aplenty and quiet roads and villages, the old island world of Zeeland, with fields, creeks, winding dikes and dams, and the often picturesque countryside between the Flemish cities of Ghent and Bruges in Belgium. Also, the large rivers in this part of the Netherlands and Belgium are a prominent feature along the route. Of course, you will be introduced to the Netherlands’ own world wonder: the Delta Works, which bear witness to the country’s age-old battle against the sea. In Zeeland you will discover towns like Zierikzee, Middelburg and Vlissingen, rich in monuments and maritime history. Holland’s most famous admiral Michiel de Ruyter was born in Vlissingen in 1607 and discovered there the attraction of the sea. The grand finale of this tour will take place in the delightful and monumental cities of Ghent and Bruges.

Day 1: Amsterdam - Vianen, ~15 km
Embarkation and check-in where the crew will welcome you on board is at 1 p.m. At around 2 p.m. the ship will leave Amsterdam and sail to Vianen, a small fortified town on the river Lek, where you will spend the night. Here the bicycles will be distributed and you can enjoy a short bicycle ride.
Day 2: Vianen - Kinerdijk - Dordrecht, ~56 km
Today you will cycle along a beautiful route to Schoonhoven - nicknamed Zilverstad (“Silver City”) - a city renowned for its talented silver smiths since the 17th century. Later in the day as you cycle through the Alblasserwaard region you will reach Kinderdijk, a village famous for its impressive row of 19 large windmills. All 19 windmills have a UNESCO cultural heritage listing and are a definite highlight - you will have the opportunity to visit one so don’t forget to bring your camera! From nearby Alblasserdam you will take the “Waterbus”, a fast ferry that will take you and your bicycle in 10 minutes to Dordrecht, one of the oldest towns in Holland.
Day 3: Dordrecht - Antwerp, ~20 or 36 km
During breakfast the Fluvius will sail to Tholen where you will start your day’s cycling by visiting the “Wouwse Plantage” forest. Another attraction on the day is the impressive Kreekrak lock. After once again meeting up with the Fluvius you will finish your day by sailing to the port city of Antwerp which is situated on the river Schelde. Antwerp is famous for handling up to 80% of the world’s rough diamonds and has many attractions that include: the City Hall, one of several majestic buildings constructed during the Renaissance period, the historical City Square Grote Market, the Onze-Lieve-Vrouwe Cathedral and the medieval Steen Castle. After dinner visit the beautiful old city center.
Day 4: Antwerpen - Dendermonde, ~48 or 64 km
Today’s tour will see you cycle out of Antwerp on a beautiful cycle path along the picturesque tidal Schelde River to Dendermonde, your home for the night. There is only one way to describe the landscape around the Schelde and that is “magnificent”. It is without doubt one of the natural highlights of the tour.
Day 5: Dendermonde - Ghent, ~52 km
Today you will continue to follow the river Schelde to Ghent where the ship will moor for the night at a lock in a suburb of town. Ghent is a lively university city that boasts a rich history. The city’s position at the junction of Leie and Schelde Rivers has meant it to be a major trading port since Roman times. In total the city features an Opera House, 18 museums, more than 100 churches and over 400 historical buildings. A major attraction is St. Bavo Cathedral where a number of masterpieces of medieval art including the world famous ‘Adoration of the Mystic Lamb’ by Jan van Eyck are kept.
Day 6: Ghent - Bruges, ~33 or 41 km
During breakfast the Fluvius will sail from Ghent to a place close to Bruges. Your bicycle tour will lead through the beautiful Flemish countryside of western Flanders around this beautiful city, widely described as the ‘Venice of the North’. The city attracts more than two million visitors every year who come for the ambience of the UNESCO World Heritage-listed historic center. An outstanding example of a medieval settlement, Bruges has managed to maintain its historic fabric as it has evolved over the centuries, with the result that today the city’s original Gothic constructions form an integral part of the town’s identity. While you are here you can visit one of Bruges many museums or simply take in the stunning beauty and culture of this unforgettable city from the comfort of a sidewalk café.
Day 7: Around Bruges and to the North Sea, ~38 or 51 km
Your final day of cycling takes you along a quiet canal and past beautiful poplar trees through an attractive polder landscape (a polder is a low-lying tract of land enclosed by embankments) dotted with small farm houses to the North Sea coast. Here if you want you can swim in the sea along an inviting sandy beach, visit any one of numerous cafés and see the attractive dune landscape. On the return ride to Bruges you will cycle along a small picturesque canal.
Day 8: Unfortunately departure and 'Tot ziens!' (Good bye)
Debarkation is at 09.30 a.m. near Buiten Kathelijnevest.

Your boat - the Fluvius
The Fluvius has been a popular choice for guests for a number of years now on the cycling cruises between Amsterdam and Bruges. The former cargo barge was totally rebuilt and extended in 2003 into a luxury river cruise barge. In winter 2017-2018, four additional upper deck double cabins were realized. The Fluvius sails under Dutch flag and management. The Fluvius now caters for max. 44 passengers.
Description of the cabins
The Fluvius has eighteen twin cabins and four double cabins. On the upper deck, there are three standard twin cabins (11 m² - 118 sq.ft. ) with two separate single beds and four double cabins (12 m² - 129 sq.ft. ) with a double bed (140 x 200 cm) and a large panoramic window. On the lower deck you will find fourteen standard twin cabins (11 m² - 118 sq.ft.) and one smaller twin cabin (10 m² - 108 sq.ft.), all of which have two separate single beds. On prior request, a child’s cot can be placed in two of the standard twin cabins.
Each cabin has an en-suite bathroom with shower, toilet and basin. All twin cabins have a fixed window, the panoramic window in the double cabins can be opened. Each cabin has an individually adjustable air-conditioning unit, a ventilation system, a flat screen TV and a hair dryer.
Description of the ship
The Fluvius has a large lounge (air-conditioned) with TV, bar and a semi-separate restaurant area. Wi-Fi is available. The barge also has a large sun deck with sitting places (tables and chairs) and a storage room for the bikes. While cruising, you can enjoy the scenery from here.
Facts about the ship
Length: 69,9 m (229 ft.), Width: 5,6 m (18 ft.), Crew: 7, Cabins: 22, Passengers: 44(max.) 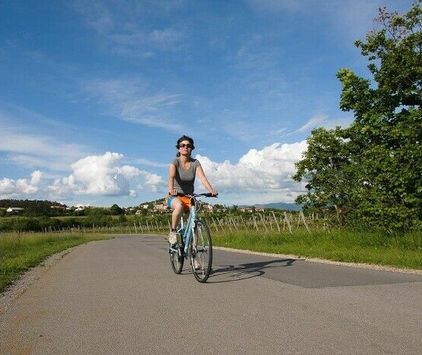 This outstanding cycle tour takes you from the Slovene capital Ljubljana to ... 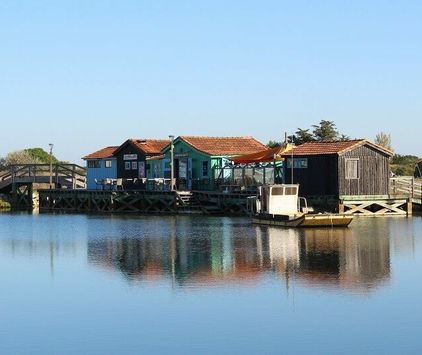 480 km of cycle path to discover all the jewels of Gironde. Sites inscribed ... 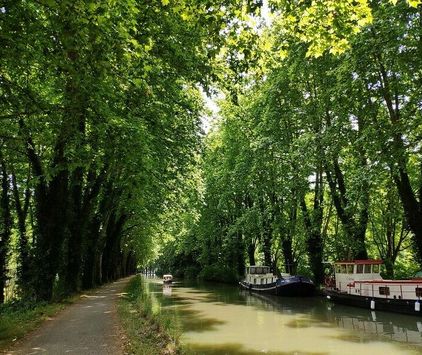 Cycling through the historic region of Aquitaine.